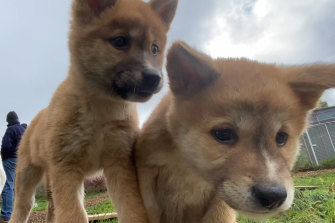 Bushfire smoke could be behind bumper dingo litters in Victoria’s largest dingo sanctuary.

“Usually the litters are three or four [pups] but this year they’re five to seven,” said Kevin Newman, a dingo handler and supervisor at the Dingo Discovery Sanctuary and Research Centre in the Macedon Ranges.

It’s cub time at the Dingo Discovery centre in Victoria, and this year there’s more than ever before.

“We’re not sure why the litters are so big, but we think it might be linked to the bushfire smoke.”

The Dingo Discovery Sanctuary houses 41 dingoes of alpine, desert and tropical descent; some were rescues, some came from other parks and some were bred on site.

They are matched up into breeding pairs, and although breeding is controlled, sanctuary staff can’t control litter sizes. There have been almost twice the number of cubs born this year compared with last year.

Bushfires are part of the natural cycle of the Australian ecosystem and Mr Newman believes that the dingo puppy boom could be a response to better conditions after the fires.

Dingoes breed in the winter and a larger litter means a higher chance of survival for Australia’s apex predator, which keep smaller herbivores and wild predator numbers in check.

“For most of the summer, the sanctuary was blanketed in smoke so while we weren’t near fires, we were certainly affected by them,” said Mr Newman.

“I would have expected a smaller litter size,” Dr Hufschmid said.
She said there is a chance there were other reasons for larger litters, such as different couplings or different genetic factors.

“I’d be inclined to think those factors are perhaps more likely, but I’m not really aware of a clear connection,” she said.

Dr Hufschmid said there was a theory, called the terminal investment hypothesis, which argued there was a mechanism where animals that were under high stress put their reproductive effort into their species’ survival.

If animals were feeling stressed or threatened, that mechanism could kick in.

“It can be greater litter sizes, it can be more parental investment,” Dr Hufschmid said.

She said researchers were only just starting to understand the impacts the bushfires have had on wildlife.

The dingo cubs end up in zoos or parks, so are rarely named.

“And the sanctuary never releases dingoes into the wild. In Victoria there is a bounty of $120 for wild dogs.”

He points to the 2015 DNA study which said that “of the samples 99 per cent [of the wild dogs] were dingoes or dingo hybrids in the wild”.

Because of this dingoes are easily and often mistaken as wild dogs, he said.

The Dingo Discovery Sanctuary is open to the public and cub meet-and-greets serve the double purpose of socialising the cubs and educating visitors.

Being situated on the edge of the Melbourne metropolitan area means all visits will stop during lockdown but Mr Newman was confident there will be plenty of cub cuddles to go around.

via Bumper dingo breeding season despite – or because of – bushfire smoke