As the Obama administration prepares to hand over power to President-elect Donald Trump, the Endangered Species Coalition has just released its top 10 list of imperiled species. The advocacy group wants the next administration to take steps to slow the rates of extinction.On the list is the gray wolf, which has become very familiar to Wisconsin residents. Melissa Smith of Madison, a field representative for the Endangered Species Coalition, says there are many misconceptions about the gray wolf. “They’re a very highly politicized animal,” she states. “In fact, many of the animals in our top 10 report, I’d almost say that the politics are threatening the gray wolf in Wisconsin more even than habitat loss.” Other animals on the list, which can be seen on the group’s website, endangered.org, include the greater sage grouse, the yellow-faced bee, the jaguar and the Snake River salmon.

For the sixth year in a row, ranchers in Washington’s wolf country partnered with Conservation Northwest to demonstrate the effectiveness of range riders for deterring conflicts with wolves. The Project also focused on sharing knowledge in 2016, hosting ranchers and range riders from our state on two trips to Montana to learn from ranchers who coexist with wolves.The Range Rider Pilot Project is a collaborative effort between Conservation Northwest and local ranchers. We also coordinate with the Washington Department of Fish and Wildlife (WDFW), independent wolf experts, professional scientists, and other partners to support this project.

LANSING, MI — Gov. Rick Snyder on Thursday signed into law a bill that would put Michigan in a position to allow wolf hunting if the federal government ever dropped federal protection of the species.Specifically, the bill would empower the Natural Resources Commission to designate a hunting season on gray wolves, should they be delisted as an endangered species. The commission was empowered to do this under a previous law, but that law was struck down by the Michigan Court of Appeals.Sen. Tom Casperson, R-Escanaba, introduced the new version of the bill. He’s been behind previous bills to allow wolf hunts in Michigan as well.The new version passed the Senate 27-10 and the House 69-39. It includes a $1 million appropriation, meaning citizens could not overturn the law through a referendum. Read the legislation here.

PHOENIX — Biologists with the Mexican Wolf Interagency Field Team (IFT) recently learned a fostered wolf pup introduced to a pack in 2014 has produced a wild offspring of her own.In a critical breakthrough in Mexican wolf management, the U.S. Fish and Wildlife Service recently reported that a genetic test of male 1561 revealed that it is the offspring of male 1293 and female 1346. The female was one of two pups fostered into the den of the Dark Canyon Pack in New Mexico in 2014.

Vidar Helgesen, the Norwegian minister for climate and environment, announced Tuesday that the government denied permission to shoot the four wolf packs in the areas of Letjenna, Osdalen, Kynna and Slettås. The government concluded that there is no legal basis for the hunt, neither in the national nature protection laws nor in the Bern Convention, acknowledging the appeal from Friends of the Earth Norway to stop the hunt. 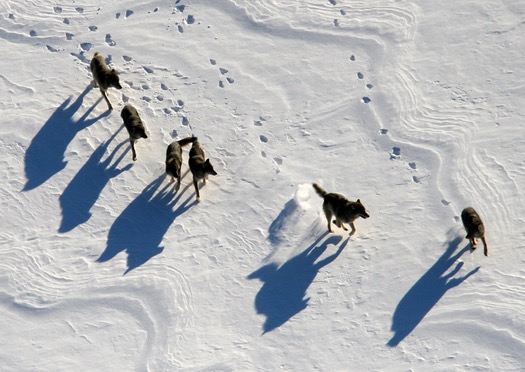 The National Park Service has proposed transplanting up to 30 wolves to Isle Royale, a historic decision that concedes that extraordinary steps are needed to restore a healthy balance of predator and prey on the wilderness island in Lake Superior.After years of deliberations, the Park Service has concluded in a new report that quickly introducing a significant number of wolves may be the best way to re-establish a healthy population on the island. Only two wolves are left there now — down from a one-time high of 50 — a result of disease, inbreeding and a warming climate that has reduced the frequency of ice bridges that give them a natural route to and from the mainland.