Loved and loathed, reviled and revered, no species that stalks Minnesota’s north woods has ever been more divisive than the gray wolf.And the debate over whether they should be protected by the Endangered Species Act — or removed from the list — has brought out passions on both sides for years.”Damn right it’s an emotional issue,” shouted Melissa Smith, with a group called Friends of the Wisconsin Wolf, at a rally in Duluth in 2014. “You’re killing things for fun. And if that isn’t emotional, I don’t know what is.”Smith was angry about wolf hunts that began in Minnesota and Wisconsin in 2012, after the last time wolves in the Great Lakes states were removed from the endangered species list, in Dec., 2011.

Wolves are being illegally shot dead, mutilated and displayed outside towns and villages in Italy in a sign of growing resistance to the species’ remarkable comeback.In the latest case of persecution, a decapitated wolf was dumped outside the medieval ridge-top village of Pitigliano in Tuscany.It was the tenth wolf in three years to have been shot dead and left on display in the region, in a macabre protest by farmers against the damage that the carnivores do to their livestock.

Source: Wolves shot and mutilated as Italy considers bringing back a cull after more than 40 years of protecting the predator

So what is really going on here?For starters, state fish and wildlife agencies have historically received the bulk of their funding from hunting and fishing license sales, as well as ammunition tax revenue. So hunters often have an outsize influence on the agency decisionmaking (so much so that, in many parts of the country, these agencies are called fish and game—not wildlife). And some hunters don’t want anyone but humans killing deer and elk. Or they are trophy hunters who want to kill wolves. In any event, agencies tend to be protective of their budgets, which translates into a desire to maximize both ungulate populations and the quantity of hunting licenses available for sale.Additionally in many states, the agriculture lobby is a powerful political force, leading the fish and wildlife agencies to decisions that often protect livestock interests—even at the expense of wildlife.Second, wolves aren’t just seen as one cog in the wheel of nature. They’re seen as a symbol of the federal government. Since wolves were reintroduced by U.S. Fish and Wildlife Service into Yellowstone and managed by FWS in other regions, they’re deeply associated with “the feds” and deeply despised by those who hate all things federal.Third is mythology. Wolves are smart, family-oriented, and communicative. Their personalities are clear. There was Romeo—the wolf who loved the dogs of Juneau and visited them every fall for five years. There was ‘06, the beloved Yellowstone badass who went without a mate for much longer than scientists anticipated, because it turns out, she didn’t need a pack to bring down an elk. She could do it all by herself, even just days after giving birth to pups. There is Journey, unknowingly making history with thousands “watching” when his adventures took him to California and back to Oregon where he settled down and started a family.

Source: Why the Latest War on Wolves? Three Reasons You May Not Know | The Huffington Post

Parks Canada plans to crack down on illegal campers and hire more staff this year in a bid to give wildlife a better chance of survival, particularly in light of wolf deaths in the Bow Valley last year.Illegal campers, who can attract animals such as bears and wolves with unsecured food and garbage, will be charged as part of a zero-tolerance policy, while the numbers for additional staff in the field are being finalized. 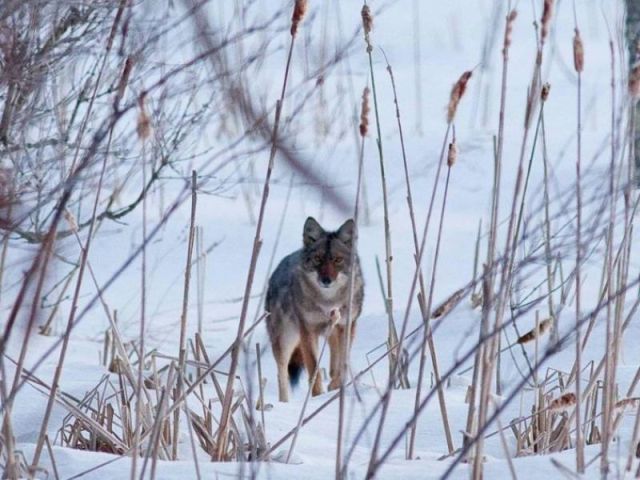 Last week a coyote attacked and killed a poodle that was leashed outside a home on Rocky Neck in Gloucester. The woman who owned the tiny dog had left him

Source: Outdoors: Coyotes are here to stay and we must learn to live with them | Local Sports | gloucestertimes.com

ALBUQUERQUE, N.M. — Biologists plan daily flights over forested areas of eastern Arizona and western New Mexico in late January and early February to conduct an annual survey of the region’s population of endangered Mexican gray wolves.Federal and state agencies say the flights may be visible to residents of Reserve, New Mexico, and the Arizona communities of Alpine and Springerville.Biologists conduct the survey as part of a multi-agency effort to reintroduce wolves into their traditional habitat.

ULAANBAATAR — Bruce Elfstrom got a first-hand look at the fragility of Mongolian nomads’ existence while producing a documentary in 2004.Elfstrom, a biologist and outdoor adventurer, was camping with a film crew and some nomadic herder families on the vast steppes of rural Mongolia. He was awakened one freezing, star-filled night by the sound of slaughter. A wolf pack had attacked the grounds, killing 17 horses and 30 other animals.Such losses are devastating but common for Mongolian nomads, who maintain a millennia-old lifestyle of small family units residing in mobile yurts, and are dependent for subsistence on livestock — traditionally horses, camels, yaks, sheep and goats.