A wandering western Washington wolf was shot near Judith Gap in September after killing sheep, having traveled about 700 miles in three months before getting into trouble.

The U.S. Fish and Wildlife Service declined to provide additional information Oct. 19. The female wolf was found dead Oct. 6 in the Fremont-Winema National Forest near Summer Lake, Ore. Gray wolves in the western two-thirds of the state remain protected under the federal Endangered Species Act, and killing one is a crime.

IR-28 was the alpha female of the Silver Lake wolfpack.

The wolf’s carcass was taken to the agency’s national forensics lab in Ashland, Ore., for a necropsy, which would determine the cause of death.

Fish and Wildlife is offering a $5,000 reward for information leading to the arrest of the person responsible. The Center for Biological Diversity, which frequently comments on Oregon’s wolf management plan, has said it will contribute $10,000 to the reward fund. Red wolves are being mistaken by some hunters for coyotes, a problem made worse as deer season picks up in North Carolina. (Land Between the Lakes/flickr.com)

COLUMBIA, N.C. – Deer hunting, a sporting tradition enjoyed by thousands of people in North Carolina, is underway in most parts of the state, but conservation groups are concerned that one endangered animal is getting caught in the crossfire.

Red wolves, who live in the eastern parts of the Tar Heel State, are often mistaken for coyotes, an animal commonly shot by hunters during deer season because of its invasive nature.

“We’re concerned that some of these anti-wolf folks over in the recovery area will maliciously go out and shoot the red wolf, knowing that all they have to do is say they thought it was a coyote,” she said. “There should be more enforcement on the shooting of the red wolf.”

The future of red wolves is currently in question in North Carolina ,with the federal government’s attempt to remove the animal from private properties in the state to federal lands. That plan has been temporarily halted by a U.S. District Judge. 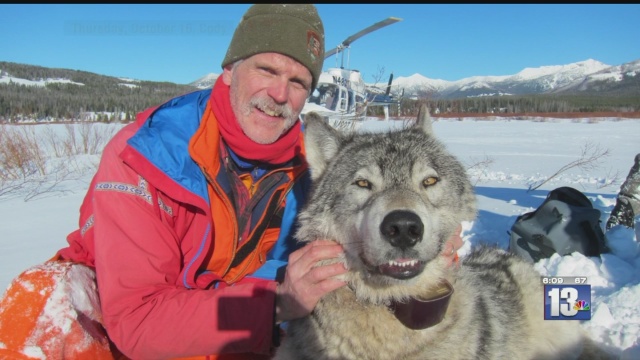 Cody – After 20 years, there’s about a hundred wolves in ten packs in Yellowstone. The Park’s wolf biologist told a packed Cody audience elk are doing well in Wyoming, too. While wolf numbers may be holding steady, people’s attitudes may be changing.Dr. Doug Smith captures and studies wolves in Yellowstone. He’s been doing it for decades, and probably knows more about the reintroduced canines in the park than anyone. He says park managers killed the predators in the early twentieth century.Smith explained, “Wolves were gone by 1926. They killed the cougars, lynx, bobcat, coyotes, wolverine…”Wolves were reintroduced to Yellowstone in 1995. Many tourists were ecstatic. But, some people in gateway communities like Cody, were furious. Charges were filed against a federal wolf manager after Park County Commissioners claimed he was ‘littering’ wolves on private lands in the area.

Abitibi-Témiscamingue is grieving the death of Michel “wolf whisperer” Pageau, the founder of Refuge Pageau which looks after wild animals in need of rehabilitation.

Circumstances have allowed many diverse creatures to become friends, but the camaraderie between a wolf and bear in Finland is certainly one of the most unique we’ve ever seen. The unlikely duo was spotted  – and then photographed – by Finnish photographer Lassi Rautiainen when she was venturing through the untrodden backcountry of her homeland. […]

Source: 10 Majestic Photos Capturing The Unlikely Friendship Between A Wolf And A Bear

A federal judge has ordered the U.S. Fish and Wildlife Service to halt its plan to transfer the reintroduced population of endangered red wolves from the wild into captivity.

“This is a great day for red wolves and for anyone who loves nature in Eastern North Carolina,” said Sierra Weaver, senior attorney for the Southern Environmental Law Center. “The court was clear that it’s the Fish and Wildlife Service’s job to conserve this endangered species, not drive it to extinction.  The agency cannot simply abandon that responsibility.”

After nearly two years of study on the future of the reintroduction program, the Fish and Wildlife Service released a Sept. 12 report that concluded recovery of wild red wolf populations was possible only if “significant changes” to the program were implemented and outlined a plan to gather most of the population — estimated at less than 45 — from the five southeastern North Carolina counties where it roams and concentrate on bolstering captive red wolf populations. By October 2017, the report said, the Fish and Wildlife Service would determine more suitable locations for reintroduction efforts. Environmental groups denouched the decision.

The history of red wolf reintroduction efforts is a long and contentious one. Reintroduction was attempted in the Smokies during the 1990s but ultimately failed. The small population in southeastern N.C. is the only wild population in the world, and a cadre of environmental groups had sued the N.C. Wildlife Resources Commission for its implementation of coyote hunting rules viewed as dangerous to red wolves, which look similar to coyotes and had been shot in cases of mistaken identity. The lawsuit ended with the parties agreeing to a series of limits on coyote hunting in the affected area, but afterward the Wildlife Commission asked the Fish and Wildlife Service to end reintroduction efforts and remove existing red wolves from private land.

That’s essentially what the Fish and Wildlife Service decided to do following conclusion of its study on the matter, but environmental groups took the issue to court. On behalf of Defenders of Wildlife, the Animal Welfare Institute and the Red Wolf Coalition, the Southern Environmental Law Center argued in a court hearing on September 14 that a preliminary injunction was needed to stop the agency from harming these native wolves in the wild.